Joe Green was sworn into office as District Attorney of Allen Parish on January 11, 2021.

Joe has been married to Reba Powers Green of Oakdale for fifteen years. Reba is the daughter of Charles and Margaret Powers of Oakdale. He and his wife reside in Kinder and are the proud parents of two children, Gillian and Clark. They are members of Kinder Bible Church. Joe’s parents are Joe and Lenez Green, who now reside in Kinder.

As District Attorney, Joe strives to focus on victims, our youth and drug addiction. It is the goal of this office to seek justice for victims of crime and to vigorously prosecute those who would victimize others, especially children. Of particular concern to Joe are the needs and challenges of the youth of Allen Parish. Joe seeks to be proactive in developing prevention programs and allocating resources so that we may change tomorrow’s criminal behavior today. Joe’s experience has made him keenly aware of the effects of drug addiction on our communities. As District Attorney, Joe seeks to use all available resources to give those with drug addictions the chance for a productive life, including intervention programs, referral to rehabilitation and the Allen Parish Drug Court. In that same effort, drug dealers, those who would profit from getting our citizens addicted to drugs, are to be held accountable. In all of this, Joe’s mission is to be fair and to seek the ends of justice. Joe asks that you join with him as we go forward, Allen Parish families, friends and concerned citizens, as we are all an important part of reducing criminal activity in Allen Parish and making our communities a better place to live, work and raise our children.

BE PREPARED - Review the case in your mind a day or two before your court date. It may help to picture the scene in your head. 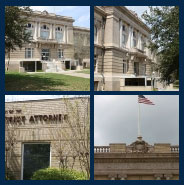